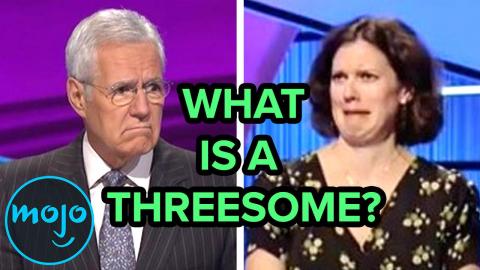 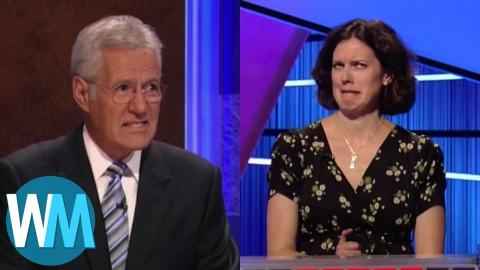 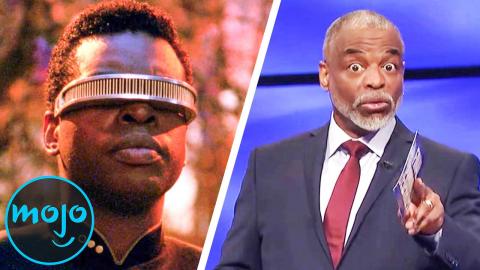 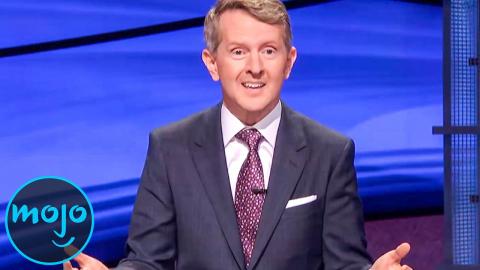 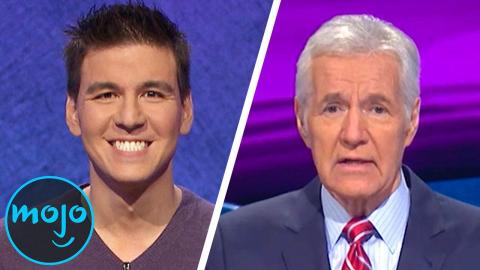 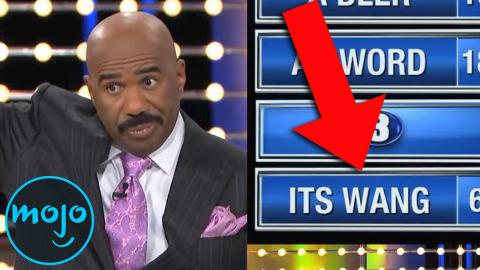 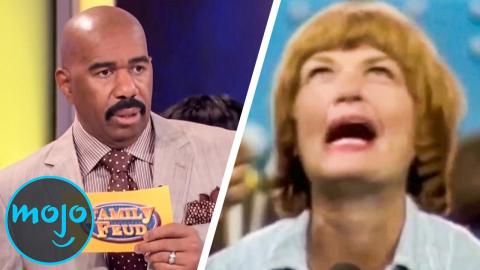 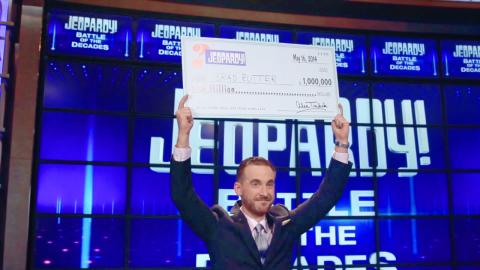 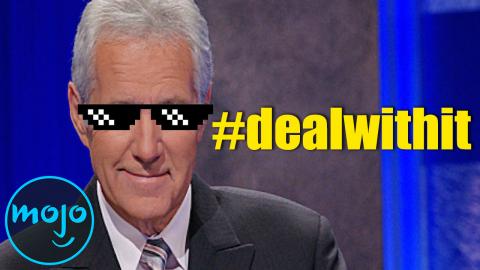 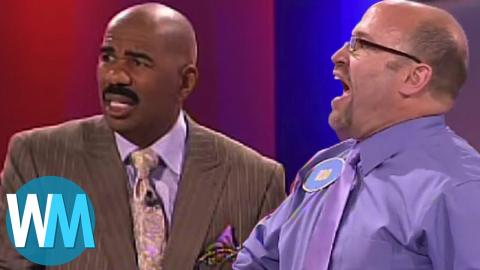 VOICE OVER: Rebecca Brayton WRITTEN BY: Nicholas Miller
You have to be pretty smart just to get on a game show like Jeopardy, but that doesn't mean contestants can't give some pretty ridiculous answers. When you're on the spot, sometimes you scramble for something to say and end up regretting whatever comes out of your mouth. These are the responses that boldly flew in the face of common sense and knowledge, or were just plain hilariously wrong. WatchMojo ranks the worst Jeopardy Answers. What do you think was the most ridiculous Jeopardy answer? Let us know in the comments!
Transcript ∧

No one ever said this game was easy, but really, these ones SHOULDA been. Welcome to WatchMojo, and today we’re counting down our picks for the top 10 worst Jeopardy answers.

We’ll be looking at responses that boldly flew in the face of common sense and knowledge, or were just plain hilariously wrong.


Look, it’s understandable that not everyone stays up-to-date with pop culture, but really? When asked which collective name Beyonce and Jay-Z released their album “Everything is Love” under, contestant Jessica answers with a stone-cold “What is Bey-Z?” A bold prediction, Jessica, but if the two media moguls and music legends had named their project Bey-Z, it’s likely their daughter Blue Ivy would refuse to ever leave the house again out of sheer embarrassment. No, instead the duo went under the name The Carters, and now we’re forever left wondering how much more successful the album could’ve been if only the two had heard Jessica’s suggestion in time.


In a clip from a 2012 appearance that has since made the rounds online, basketball legend Kareem Abdul Jabbar flubs this easy question regarding parental film ratings in the United States. The clue gives the contestants four of the five film ratings before asking them to name the missing one. Despite NC-17 already being listed, Jabbar rings in and responds with: “What is X?” Could this be a case of game show nerves from a sports icon, or was Jabbar’s mind just in the gutter? Unfortunately this isn’t Jabbar’s only embarrassment from the show, as he’s made several other memorably funny appearances on the series over the years.


To be fair to Tournament of Champions contestant Kara, her answer here at least makes sense, especially after fellow player Roger set up the question in a manner that accidentally sounds a LOT like “group sex.” Winning at “Jeopardy” requires sharp reflexes and can often result in players answering with the first thing that comes to mind, which definitely seems to have been the case here. Alex responds with a surprised and elongated no, but it seems he likely at least looked towards the judges to see if the answer would be accepted. You may not have been too far off, Kara, but this show airs at 7:30!


What are two three-letter words that come together to form another term for a hired killer? Well, the answer definitely isn’t “hot gun.” Contestant Kevin rings in right away here but is flustered when he realizes he doesn’t have an answer. After a few seconds of struggling to come up with the correct response, Kevin delivers this absolute gem of a “Jeopardy” guess. First of all, no, but second of all, you forgot to phrase your answer in the form of a question, Kevin! To be fair, the pressure of competing on “Jeopardy” has to be intense. Sometimes all you can do is buzz in, string a few words together and hope for the best.


When asked which form of locomotion were a group of mice famously seen using to escape predators in 2008, it seems that the word “locomotion” is really what stuck out to contestant Christine. The image of a group of mice fleeing predators via train is surreal and it begs the question: were the mice conducting the train as well? Christine immediately knows her wild guess did not pan out, and fellow player Dan chimes in immediately after with the correct response of swimming. Trebek can’t help but laugh out loud, and we don’t blame him.


This is still a family show, right? When asked to fill in the blank for the subtitle of the sequel to children's’ movie “Cats and Dogs,” the teen players seem to be at a loss. Contestant Raya buzzes in for a guess, and to be fair she was on the right track. The answer, Kitty Galore, was a reference to classic James Bond character Pussy Galore. After a pause that feels like forever, Raya apparently gets some wires crossed and responds with the name Pussy Furry. Close but yet so far. From now on, can we please try to keep the show to a safe-for-work level?


For most kids growing up in the U.S., dialing 911 in the case of emergencies is one of the very first things you learn. This apparently was not the case with contestant Jackie, who instead responded with a different useful phone number. 411 is the line you call for the local business directory, which has admittedly become pretty useless in the age of the internet. If you call 411 for an emergency, you’d better hope someone even picks up the phone! In all seriousness, we hope that this was a simple flub, and that Jackie knows the right number to call should the need arise.


That’s a question you never want to hear. Contestant Tom certainly didn’t do his public image any favors after this awkward Jeopardy appearance, in which he guessed that according to common law, the age of consent is 14 in boys and 12 in girls. The correct answer is puberty, but presumably the words “common law” threw Tom off. In what had to be a case of making an uncomfortable mistake under intense pressure, Tom here is a perfect example of why players should really make sure they think carefully about their responses before chiming in.


When preparing to compete on “Jeopardy,” it’s important to try to fill in some knowledge blind spots. Joe here, for example, probably could’ve brushed up on some sports facts. You know, like how the NHL stands for National Hockey League and not National Basketball League. Even if the clue HAD been about basketball, is Magic Johnson really the right person for that guess? Not even Michael Jordan? What really cements the moment as one of Jeopardy’s most legendary mistakes is Trebek’s short, perfectly hilarious response: “Oh no.” If you’re getting sly shade from Alex Trebek, you know you messed up!

Before we reveal our top pick, here are a few dishonorable mentions.

“What Are Public Toilets?”

“Who Was Chris Farley?”


If you’re a supercomputer built from the ground up by some of the smartest technological minds in the industry to compete on “Jeopardy,” it’s an understatement to say expectations might be high. During almost the entirety of his game against “Jeopardy!” legends Ken Jennings and Brad Rutter, Watson performed exceptionally, answering clue after clue correctly and making perfectly-calculated wagers; all until Final Jeopardy. In what must go down in history as the biggest choke of all time, under the category of U.S. Cities with a question concerning airports, Watson responded with “Toronto” and five question marks. What happened here?! Watson would go on to win and have success in later shows, but we’ll never forget this timeless gaffe.

Send
Dana-Ann Caporicci
“I totally agreed with this funny list.”