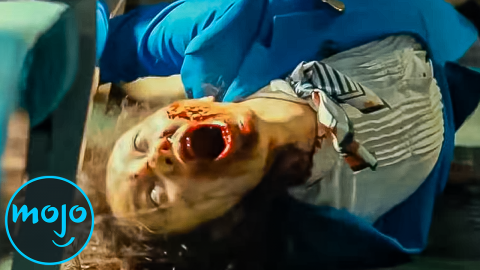 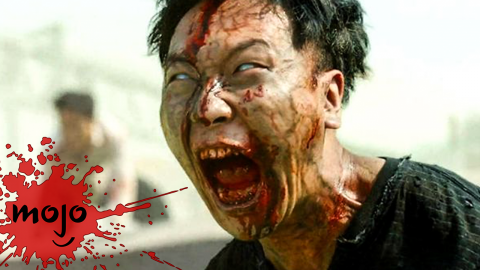 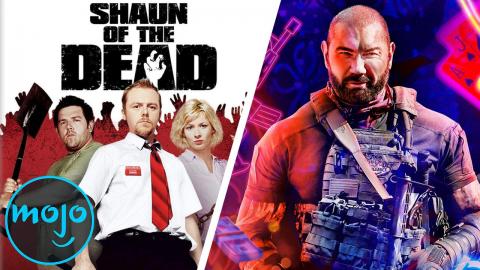 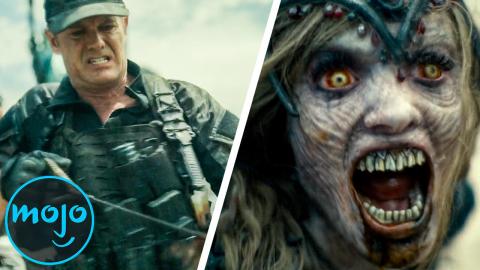 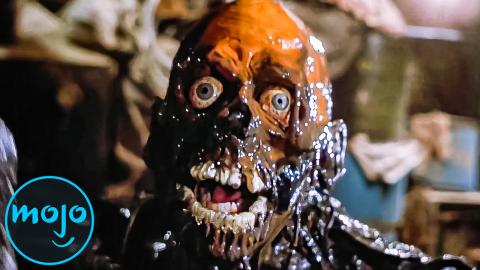 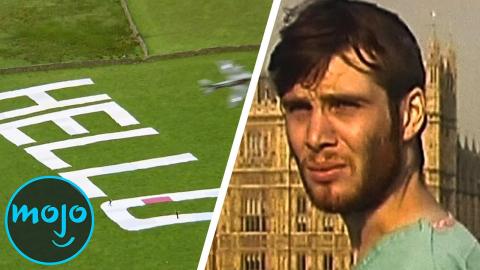 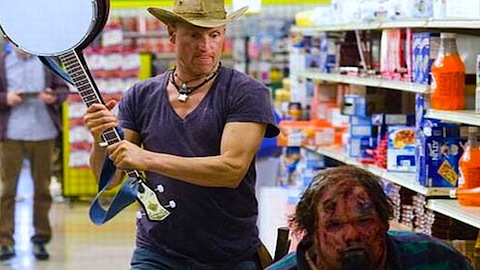 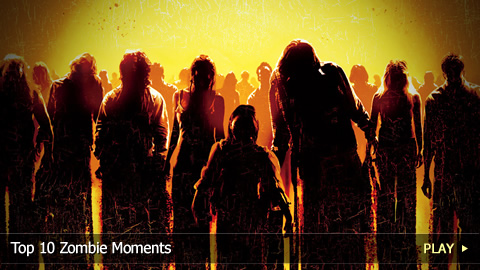 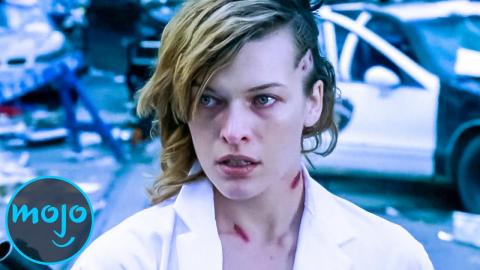 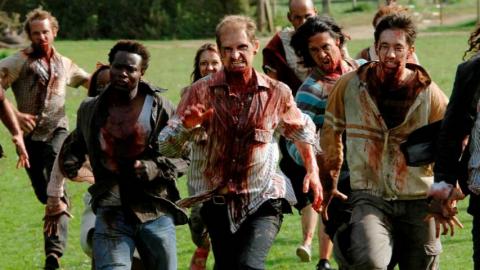 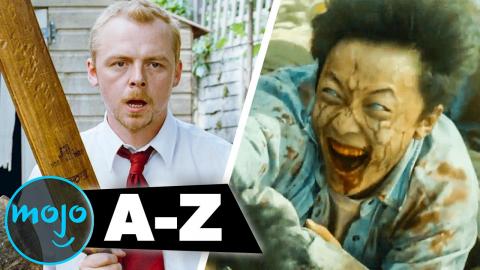 The Best Zombie Movies of All Time from A to Z 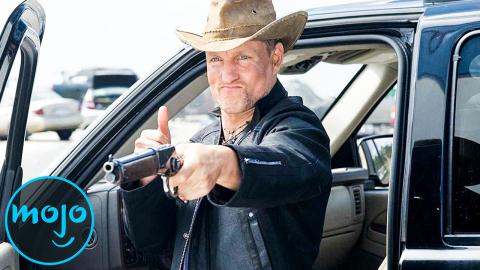 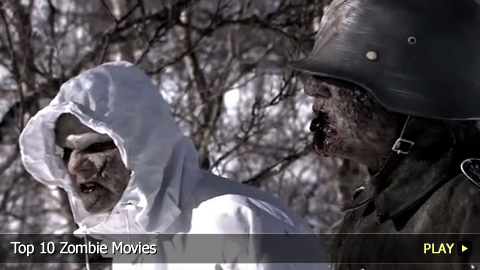 VOICE OVER: Peter DeGiglio WRITTEN BY: Nathan Sharp
These zombie transformations will freak you out! For this list, we'll be looking at the scariest scenes in which a human character transforms into a zombie or zombie-like creature. Our countdown includes “World War Z”, “Dawn of the Dead”, “28 Days Later”, and more!
Transcript ∧


Welcome to WatchMojo, and today we’re counting down our picks for the Top 10 Scariest Zombie Transformations in Movies.

For this list, we’ll be looking at the scariest scenes in which a human character transforms into a zombie or zombie-like creature.

Which of these scenes did you find the most unsettling? Let us know in the comments below!

“World War Z” (2013)
We know, we know, “World War Z” is nothing like the beloved book. But it’s still a very entertaining zombie movie when taken on its own terms and contains many effective sequences. The opening sequence is among them, as Gerry and his family witness the rise of the zombies. Out of nowhere, people stuck in traffic start transforming into fast and blood-thirsty killers. They contort in grotesque manners, slam their heads into windshields, and, you know, bite people. This understandably causes a lot of fear and panic, and the scene’s use of shaky cam and quick cuts places viewers in the middle of the pandemonium. Now this is how you start a movie.

“Resident Evil” (2002)
Just by virtue of being played by Michelle Rodriguez, we knew that Rain would kick some butt. Unfortunately, she’s the first member of the team to get bitten, and the clock tragically begins ticking. Rain’s transformation throughout the movie is slow and difficult to watch. It becomes very obvious that she’s dying - she becomes weaker and more fatigued, her skin turns a pale white, and she sweats so much it looks like she just hopped out of the shower. Her final transformation is also quite creepy, as she stands up normally and cranes her neck before revealing those terrifying bright blue eyes. Why her teeth suddenly became rotten, we don’t know…

“28 Weeks Later” (2007)
The “28” series famously reinvented the zombie genre. They aren’t really “zombies” - they’re “infected.” They don’t mindlessly shamble about - they run. And coolest of all, it doesn’t take hours or days to turn. It takes about, oh, ten seconds. The movie takes full advantage of this with the horrifying transformation of Don. Don kisses his wife Alice, not knowing that she’s an asymptomatic carrier. He immediately begins twitching and frothing at the mouth, and it really isn’t long before he’s writhing on the floor and spitting up blood. He then attacks his wife, and it is grisly. It’s a great sequence, containing effective uses of music and sound design. Don actor Robert Carlyle is also excellent, his changing body language and expressions speaking volumes.

“Rec” (2007)
This short but sweet Spanish zombie movie follows a news reporter named Ángela who’s visiting a local fire station. While she’s there, the station responds to a call from a nearby apartment complex, which is being quarantined by the local authorities. While at the complex, Ángela meets a sick young girl named Jennifer, whose mother claims is suffering from tonsillitis. The truth is, quite obviously, far more horrifying. In one of the movie’s most effective sequences, little Jennifer suddenly bites into her mother’s face before screeching at some responders and running upstairs. It’s a startling sequence that’s brilliantly filmed, and it’s with this transformation that the movie veers into full nightmare territory.

“Planet Terror” (2007)
This zombie film from Robert Rodriguez is intentionally ridiculous. Originally released as one half of the “Grindhouse” double feature it harkens back to the cheap, exploitative, and astoundingly gory horror films of the ‘70s. In this one, some type of biochemical agent is released into the air, turning the small town’s citizens into zombies. Lieutenant Muldoon explains the origins of the gas before turning into some type of outrageous and grotesque monster. We watch in horror as his face starts breaking out with gross, bubbling boils, and before we know it, he’s a giant, slimy monster. Despite the silly nature of the scene, there’s a certain degree of unease to it. Not to mention grossness.

“#Alive” (2020)
A South Korean horror film, “#Alive” effectively blends two pop culture fascinations - zombies and streaming. Oh Joon-woo is streaming video games when a zombie apocalypse begins outside his apartment. Naturally, he remains inside to stay safe. But, curious, he cracks his door open and accidentally lets in a bitten neighbor named Lee Sang-chul, who then uses his bathroom. It goes about as well as you’d expect. It’s not long before Sang-chul starts bleeding from his eyes and contorting in quick and jerky movements. He then attacks Joon-woo with a jump scare, capping an already horrific sequence with an effective startle.

“Dawn of the Dead” (2004)
Zack Snyder’s first foray into the zombie genre was largely better than his second. A loose remake of George A. Romero’s iconic original, “Dawn of the Dead” contains many effective zombie transformations. Perhaps the creepiest of them all is Andy’s. The owner of a distant gun store, Andy spends most of his apocalypse days on the roof taking potshots at zombies and playing chess with Kenneth. The mall group decides to send food over to Andy, but zombies break in during the attempt and bite him. Andy soon starts voraciously scribbling on his whiteboard, and through a wonderfully creepy reveal, we realize that he’s turned. It’s a very well filmed and edited sequence, and further tension is added when zombie Andy starts chasing Nicole.

“Train to Busan” (2016)
Another great Korean film, “Train to Busan” mostly takes place on the titular locomotive. This naturally causes a lot of great tension, with the enclosed train setting offering palpable feelings of claustrophobia and panic. This gimmick is evident in the first transformation scene, which comes via a sick stowaway. The young woman collapses, but when a train attendant radios for help, she slowly rises to her feet in the background. This photography trick has been done lots of times before, but it remains compelling. Adding to the horror is the woman’s cracking neck and zombified appearance, which includes pale eyes and dark veins. Props to the makeup department for this one. That is one creepy zombie.

“Overlord” (2018)
This horror film from producer J. J. Abrams shares much in common with “Planet Terror,” including a similar grindhouse-y tone. In “Overlord,” a paratrooper squad lands in a small Nazi-occupied village and discovers grotesque human experiments underneath the church. A soldier named Chase is shot and killed by a Nazi soldier, but fellow American Boyce injects him with an experimental serum in the hopes of bringing him back to life. Not a good idea. It works, yes, but Chase quickly turns into a violent zombie-like creature. It’s a horrific transformation, complete with lots of grisly visuals and revolting sound effects. Actor Iain De Caestecker certainly commits to the bit, what with his contortions and blood-chilling screams.

“28 Days Later” (2002)
Poor Frank was the heart of “28 Days Later,” and he’s the only one of the four main characters to die. His death is both scary and deeply tragic. Frank suffers the worst luck of all when a small drop of infected blood falls into his eye. Frank quickly begins growling and snarling as his body contorts, and his young daughter is forced to watch her loving father go mad. Luckily, incoming soldiers put him down before protagonist Jim is forced to act. Brendan Gleeson’s physicality is terrific, as is the music and sound design of the snarling. The fact that it’s so painfully quick, combined with the fact that Frank dies in front of his daughter, makes it even scarier.
Comments ∧